Let's Have Some Real Talk about Shane

So, if you came to this website in the first ninety days of 2016, you saw a nice long post about myself, my battle with alcoholism, and how I had decided to go sober.  The main motivating factor for this was an incident involving myself and my girlfriend's family - and me turning into a full-blown raging doucheasaurus.

In the heat of the incident, the fights, and the embarrassment; I made the quick decision to go sober.  Getting hammered drunk caused both the incident and ensuing fight - so, I felt that I needed to cut it from my life completely.  It was a decision that I made, and was never asked to do.  I reached out to a friend, and began going to AA.

As far as AA went - it didn't turn out to be exactly what I expected.  I seriously was just looking for a support system to remind me things are okay.  What I found, was a very pressure-filled and "cult-like" environment that didn't suit me well.  I was told, "You have to go to 90 meetings in 90 days".  Well, my schedule didn't really allow that.  I work a full time job, have a significant other, and have other things in my life that I have made commitments to.  Fitting in one meeting a day wasn't an option, and I felt like I was being judged for not making that happen.  Also, the more and more I read about the steps, the homework, the parts of life that they wanted to discuss - these were personal things not related to my drinking, and perhaps things that I wasn't ready to address or want to talk about.  In my attempt to try and stay sober, WHY do you feel the need to discuss my sexual history?  The two things are not connected, nor mutually explicit.

It felt like school and homework - not what I wanted when I signed up and started exploring.

So, what did I do?  I spent ninety days sober.
I spent ninety days, every day, making the choice - I don't need a beer today.  I don't need any alcohol today.
I spent ninety days discussing a lot of relationship problems and issues that I have had repressed for many years.  Many of the factors that led to Caitlin and I's fight on vacation, stemmed from mental problems and inadequate feelings that I had come to live with over my life.  Many problems with past relationships had led to a massive amount of distrust and feelings of resentment for anything that took focus away from me in the relationship.  I've always been narcissistic, but these were even deeper self-centered-feelings that caused major issues.  It was also made abundantly clear that I am a very emotional drinker, and I need to avoid alcohol when in emotional situations.  Luckily, during those first ninety days, I had two or three moments of extreme frustration or anger - that I did not allow to push me to drinking.  I have found a desire to be a responsible alcoholic, and avoid making the decisions that I know to be toxic.  In this time, it was also made painfully and bluntly aware to me; that I am no longer twenty-one.  While it obvious that I live in disillusion of Peter Pan Syndrome; I need to grow up and be responsible when it comes to my drinking.  I am far beyond my years of partying all night, every night, rinse and repeat.  Manchild, I am.  Alcoholic Twat Waffle, I do not need to be.

I know I painted a very bad picture of my experience with AA.  I went for four straight weeks, once a week, every Monday night.  These four meetings actually really helped me, when listening to other people's experiences and seeing how they ended up where they were at.  I saw lots of similarities that opened my eyes to a lot of the things that I had been doing in my own life, and seeing these things anew; it allowed me to open up discussions with Caitlin that helped us strengthen our relationship by tearing down some of the walls I had set in place.  After lots of very progressive conversations, Caitlin and I found ourselves in a much healthier and more enjoyable relationship than we had been for the past year.

And yet, I still chose to not drink.  For ninety days.  Having a beer was brought up a few times, and she asked me if I wanted to go somewhere, or do something, or if I wanted to buy something for home.  And I kept putting it off, and saying that I just didn't feel it yet.  I didn't need or want it yet.

As my 90th day approached, Indiana City (which is still my favorite brewery in Indiana) was releasing their Mimi's Tabernacle: One of my favorite beers of all time, and the beer that made me a regular at their establishment.  So, I went out of my way to acquire a bottle, and then let it sit in my fridge for nearly two weeks, until I hit that 90th day of sobriety. 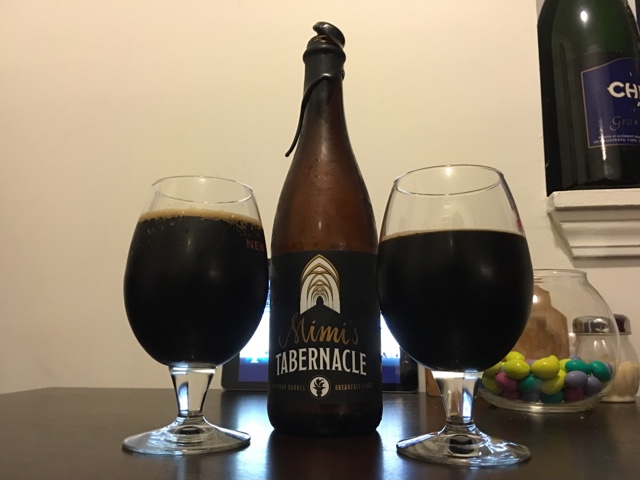 And I celebrated ninety days of sobriety, by sharing a bottle of Mimi's Tabernacle with my Amazeballs Girlfriend, who supported my decisions and right to chose from day one.  She never demanded a stay sober, she never called it a deal-breaker if I drank again, she supported me the whole way.  We sat around watching the Pacers game, drinking Mimi's, and just having a wonderful evening.  I didn't announce it on Social Media, I didn't post a picture, I wasn't going to brag about drinking one of the greatest beers ever - Nope.  My sobriety died a small, quiet, painless death in my living room with the love of my life supporting me.

I then waited an entire week to even consider touching another beer.
Seven whole days.  It didn't bother me.  It didn't consume my thoughts.  I wasn't even worried about when i was going to have another beer.  Until my Facebook and Twitter blew up with National Beer Day.  If not for this "holiday" - I probably wouldn't even be drinking tonight.   I'm going to enjoy one special beer tonight, in celebration, and then wake up tomorrow and go about my new life just as happy as I am as I write these words.