Back story for this beer...
In 2018, I collected Q1, Q2, and Q3 throughout the year.  I spent all of December looking for Q4, because I had a gimmicky post in mind, called My 2018 Taxman Year End Audit.  I was going to drink all four of them together, and try to write up a nice piece on all four of them. 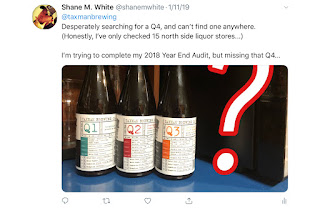 After a month with no reply, I reached out again.  I was hoping I would be told they had them for sale at one of their locations.  Alas, they never answered my second attempt. 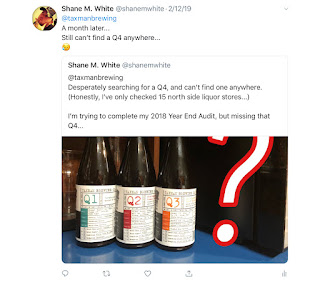 This really sucks, not only because I still haven't found a bottle...
In 2018, Taxman vaulted to the top of my Indiana Breweries, and became my favorite.  A spot long held by Indiana City Brewing, now belonged to Taxman.  Their Coconut Variant of Evasion, 401(Cake), Frozen Assests (and Imperial Frozen Assets), No Sparge, and recently their Red Wine Barrel Qualified have all been some of the best and most enjoyable beers I have drank recently.

This brings us to 2018 Q1.
It's a really light and refreshing Farmhouse Ale, that goes down light and easy, and finishes with a small hint of sour.  I assume the sour comes from the white wine barrels this beer was aged on.

Another delicious offering from Taxman. 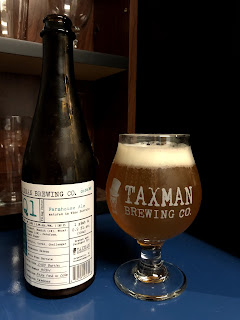