My buddy Miller - who is currently on vacation in Mexico - asked me if I had the time to swing into Central State for him, because he wanted to make sure he got a bottle of their Barrel Aged Bashi.  This request was fine with me, because I had been wanting to go buy a four-pack of their Raspberry - because it sounded delicious.  A raspberry sour with lactose, should be like a fruit smoothie, right?

Sadly, upon arrival I found out they had sold out of Raspberry (it was released one week earlier...), but they did still have it on draft.  So, I grabbed a quick one while my Bashi bottles were being rung up.

The beer was fine, it was tasty.  I would have easily drank all four cans - but I also didn't love it.  It wasn't as awesome as I was hoping for.  Just, good.  Fine to drink. 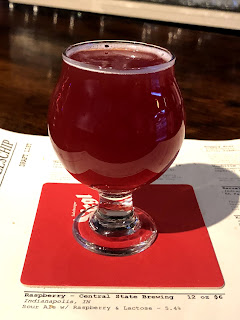