A lot has changed since Beer #342 in October of 2013.
I've drank about 900 other unique beers.
I have invested in the BrewDog brand, and now represent them in almost every aspect of my social life (via hoodies, shirts, and hats) and this Fall they are scheduled to open a BrewPub in downtown Indianapolis - which I have been began the contact process to attempt to work for them when they open.

So, I recently bought the new Seasonal Pack, and the Seasonal option included was 5AM Saint, which I know took a hiatus from production, but was then brought back in the recent years.

It's still tasty.  I nice malty Amber ale with some good flavors.  Easy to drink, and a welcome option instead of a Pale Ale. 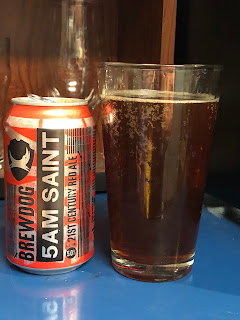