Sunday night, Post-TSO beer.
This bit of writing is going to be a cathartic moment for me, so bare with me as I got down the nostalgia train tracks.
My first TSO concert was in 2006.
It was after my first divorce, and I wasn't dealing well with being single during the holiday season.
Some good friends of mine bought me a ticket and took me to the show.
Since then, I've never missed a show in Indy.  There's been a few years that they skipped Indy, and played in Fort Wayne instead - but every show in Indy since 2006, I've been to.  (I assume the years they missed Indy were due to scheduling conflicts, like with the Pacers, or something)
In December of 2014, I didn't have a girlfriend, and I randomly asked Caitlin to go to the TSO show with me.  We called it our first faux-date, and one month later we were officially dating, and my life got so, so good after that concert.  Caitlin and I went to TSO every year together, kind of anniversary of that first faux-date.  The last two times, we brought Lily with us, and turned it into a family event.  Something I looked forward to every year.
When tickets went on sale this year (the TSO fan club pre-sale, baby!), I didn't buy one.
I guess a part of me was holding onto hope that Caitlin would magically want to go together - and I didn't want to buy one ticket for myself, and then be stuck trying to figure out how to afford two more together.  Nonetheless, as time grew closer to the show, I came to the realization that my dream was not going to come to fruition.  So, I bought myself a single ticket - and still went to the show tonight.  It was a juxtaposition of emotions - as I love their music and performance, but I'm an emotional delinquent, and many of the moments brought tears my eyes.  But, I'm still proud of myself that I went.
So, to celebrate this year's concert, I came home and opened one of my Holiday Haul beers from yesterday.  And, in typical Shane fashion, it's a beer that relates back to Caitlin, as we went to Hi-Wire together during our honeymoon.  So, I've been thinking about her all day (which I do everyday, but today was a little more in my face) and I decided to make this nightcap a dedication to her also.
10W-40 appears to be their name for any Imperial Stout that they do.
A quick Google search shows a few other variants - including a German Chocolate Cake variant that includes coconut - so you KNOW I wish I had tried that one.  Hopefully it's something that they do again (or seasonally) and I can keep an eye out for it.
This variant - is okay.  I'm trying to debate with myself if I think Caitlin would have liked it.  She was a Stout Girl - but she also didn't like things that were TOO complex, and this one has A LOT going on.
The  aroma is solid.
It literally smells like gingerbread, so that's cool.
The upfront tap is of a strong and powerful stout.
After the beer goes down, that's when the mouth gets weird.
The chocolate flavor from the cacao starts creamy, but gets dry/bitter quickly.
The cinnamon is powerful, but brief.
I'm sure the other ingredients contribute too, but it's just kind of confusing for a minute, before things mellow into a decent vanilla finish.
I like beers that have distinct "acts" to their flavors - and this beer does.
I'm just not convinced that I enjoy those various moments of flavor.
It's a nice beer, and it's a perfect holiday vibe.
It makes me feel warm inside, and the vanilla finish does leave my mouth happy after all of it's confusion.  It's not something I love, but it's something that I wouldn't turn down, if I was curled up next to a warm fireplace. 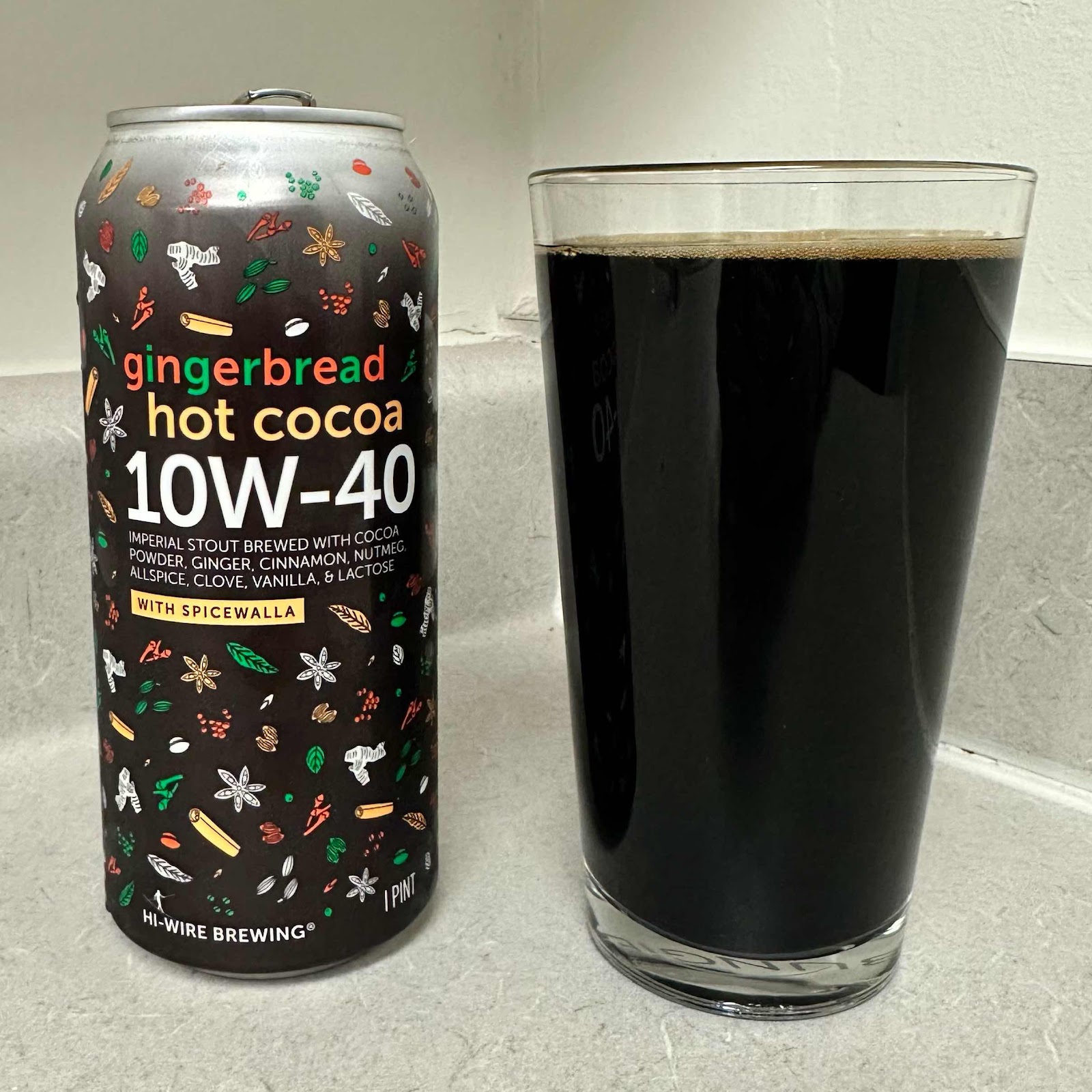